On February 17, the National Park Service released for public review the the Environmental Assessment (EA) for consideration of modifications to the ORV rule currently in effect at the Cape Hatteras National Seashore Recreational Area.  As described in the press release below, public comments can be submitted during the 30 day period ending on March 18, 2016.

You will recall that the NPS conducted scoping meetings during the summer of 2015.  At that time, OBPA submitted proposals for consideration.  Those proposals can be reviewed in other articles on this website.  OBPA will compare the EA to the 2015 proposals and submit comments accordingly during the next 30 days.

Your individual participation in the EA comment period is also critical to the success of our efforts to improve access at the Seashore.

OBPA urges you the review the press release and the EA and provide comments.  As you may recall, the promulgation of the rule is a long, highly regulated process.  The current rule was implemented in February, 2012.  Rule changes can only be implemented after following the same process used to establish the original rule.  Therefore, opportunitiies to make rule changes such as the ones under consideration now are few and far between.

The EA is a 169 page document prepared in accordance with the National Environmental Policy Act (NEPA).  While you may not want to read the entire document, you will want to review the three alternatives discussed by the NPS.  Page 51 of the document (actual page 59 within the pdf) is titled "Table 1.Alternative Summary".  The NPS preferred alternative is Alternative 2.  These alternatives are described in detail with accompanying maps in other sections of the EA.

A link to the one page Alternative summary follows the NPS press release below.

Contact : 252-473-2111 | This email address is being protected from spambots. You need JavaScript enabled to view it.

Cape Hatteras National Seashore (Seashore) released today, for public review, an environmental assessment (EA) for the consideration of modification to the final rule for off road vehicle (ORV) management. The Seashore is holding public comment meetings to consider changes to the ORV special regulation (final rule) as it relates to morning opening of beaches, extending the length of fall and spring seasonal ORV routes, and modifying the size and location of vehicle free areas. This EA, prepared in compliance with the National Environmental Policy Act, will be open for review and comment for 30 days from February 17 - March 18, 2016.

This EA was prepared in response to the Defense Authorization Act of Fiscal Year 2015 (Public Law 113-291) pertaining to the Seashore’s Off-Road Vehicle (ORV) Management Plan.

The EA is available for review and comment at: http://parkplanning.nps.gov/caha-orv-ea. Select the “Open for Comment” link to view and comment on the EA. Comments can also be mailed to: Superintendent, Cape Hatteras National Seashore, 1401 National Park Drive, Manteo, NC 27954. To ensure your comments are included in this process, they must be entered into the above referenced website or postmarked by March 18, 2016. Comments will not be accepted by fax, email, social media, or in any other manner than those specified above. Bulk comments in hard copy or electronic formats submitted on behalf of others will not be accepted.

For more information see the park website at: http://www.nps.gov/caha/parkmgmt/2015ndaact.htm. 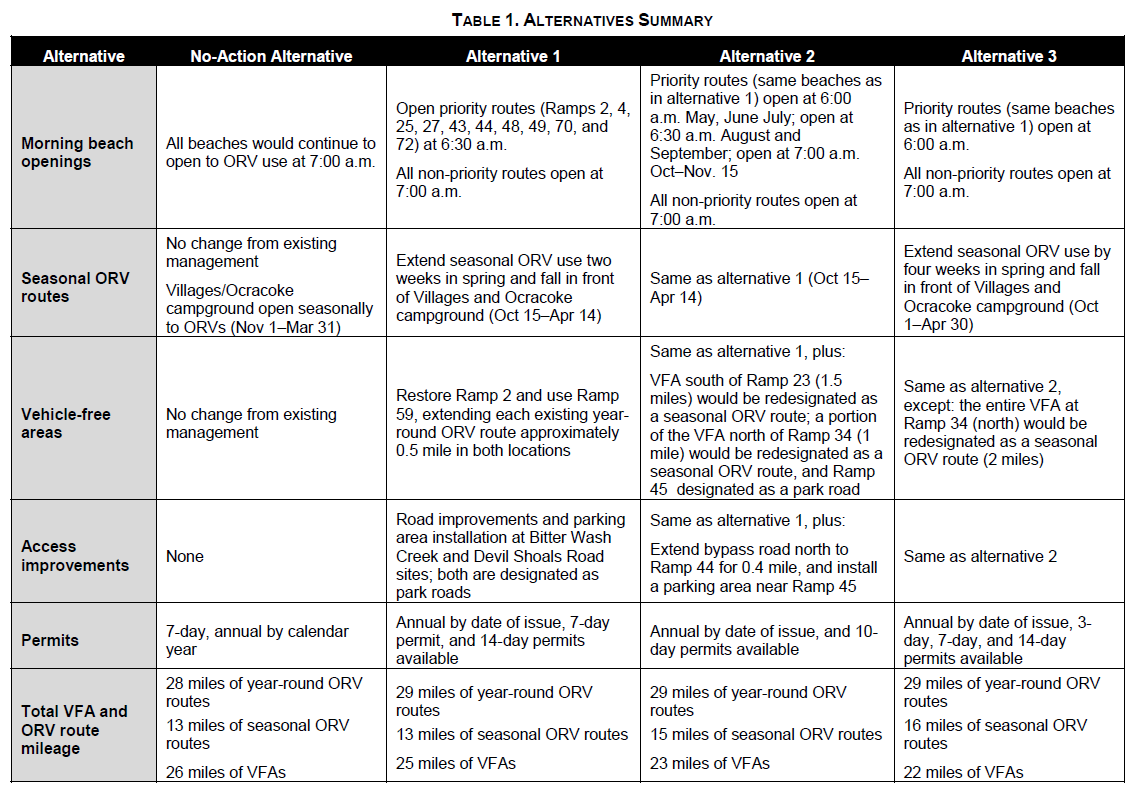